One of the main issues of preparation for the celebration of the 70th anniversary of the Victory is the preservation and improvement of the memorials.

The head of the city administration Vadim Jerslev spent about an on-site meeting together with the Chairman of the Committee on culture, General Director of LLC «Novomoskovsk-remstroyservis» Andrew Milkovi and specialists of the Department of architecture and urban planning. They checked the condition of the memorial wall in honor of the Heroes of the Soviet Union.

It was decided to completely rebuild the Wall of Heroes, as it came into disrepair and gradually began to crumble.

Specialists LLC «Novomoskovsk-remstroyservis» has developed a new project for which the design of the wall changes: a Foundation, in a monolithic wall will be mounted on metal plaques with illumination from within ruby. 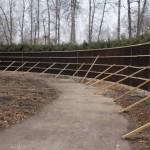 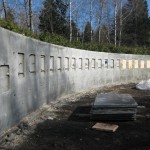 If you find a mistake, contact me Aleksey.Rudakov@eurochem.ru
« Ранее Далее »